"Zone of Truth forbids you from lying, but it certainly does not prevent you from deceiving." - Anonymous DM 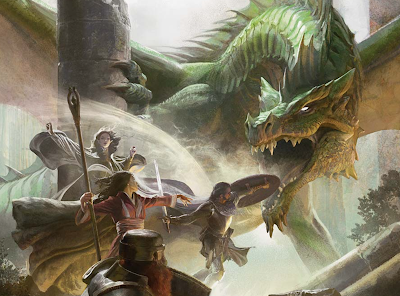 To the players of this game, my heart goes out to you. This is the kind of DM'ing that ruins D&D for people. Let me give you a little context about what actually happened here.

"They survived Cragmaw Castle and got out with Gundren and the doppelgänger disguised as a drow woman." - Anonymous DM

So this group is playing the excellent 'Lost Mine of Phandelver' from the 5e starter set. The main thing to notice here is that the players have had a huge win. They saved Gundren (your patron from the outset of the adventure), and they captured the doppelgänger Vyerlith. Great job team!


"I was ready to have her craft a story, make a deal with the party to lead them to a shrine she claimed could help them but really it was useless and actually dangerous, and get away from there." - Anonymous DM

Ok, so here's where things start to go wrong. There is nothing wrong with the DM having a plan for the villain to escape. This is fun and exciting, and if her plan worked, the players would have wasted time, lost some resources, and then Vyerlith is set up to be a pretty great villain!

The problem isn't in the plan itself, its that the DM is attached to this plan. He wants this plan to go off without a hitch. He didn't consider that his players might have the perfect tool to stop the villain from doing just such a thing!

“Next session starts, and I thought the cleric was tapped out from Cragmaw Castle, but lo and behold he pulls out a Zone of Truth. I keep the poker face, drow fails her save, and I'm about to resign myself to giving up that mini-dungeon and misleading.” - Anonymous DM

Zone of truth is a 2nd level enchantment spell that says...


"Until the spell ends, a creature that enters the spell's area for the first time on a turn or starts its turn there must make a Charisma saving throw. On a failed save, a creature can't speak a deliberate lie while in the radius. You know whether each creature succeeds or fails on its saving throw." - Players Handbook

So the DM is a little bummed his villain's plan won't work, and he won't be able to mislead the players. He has nearly resigned himself to the fact that the players outwitted his sneaky doppelgänger. However, this is where it all starts to really go south. Zone of truth also says...


"An affected creature is aware of the spell and can thus avoid answering questions to which it would normally respond with a lie. Such a creature can be evasive in its answers as long as it remains within the boundaries of the truth." - Players Handbook

Alright, so it's totally within the boundaries of the rules as written to be evasive to the players or outright refuse to answer them in this case. This would have been ok, because if the PCs prisoner clams up and refuses to answer certain questions, they have at least gained some important information about WHAT information is important. Let's watch some more of this train wreck! From the interaction between the NPC and the Players...


"If you are planning to go to the Wave Echo Cave, I SUGGEST you visit a certain shrine nearby," is how it all started. There MIGHT be a holy relic that COULD help them against the undead in the cave. Everything vague yet within the bounds of the spell, and I thought it was a bit too obvious but they bought it and no one Insight checked her."  - Anonymous DM

Let's break this down. First, the doppelgänger's suggestion to go to a certain shrine nearby. Fine. Not lying, just saying what she thinks the players should do. She could tell them to go jump off a cliff. This still isn't lying. However, the next sentence...

"There MIGHT be a holy relic that COULD help them..."

You are really stretching the bounds of the difference between a lie and just being evasive here. I would say stretching it so much that the players aren't going to notice, and think that you just cheated.

And now for the cherry on top...

"and no one Insight checked her"

Why would they? She's in the zone of truth! (Also, why didn't the DM ask for an Insight check?)

Some RPG's use the phrase 'Judge' or 'Referee' rather than 'Game Master' or 'Dungeon Master'. I think these games have landed on an important distinction with these terms. A Judge or Referee is an impartial observer who helps to adjudicate the rules. They aren't the master of anything, they try not to have bias, and they don't have a proverbial horse in the proverbial race.

So what does the DM think is going to happen when the players follow this red herring? Did he consider what this would look like from their perspective? They outwitted the villains fair and square, but the DM still took the players for a ride.

The players went through all the trouble of capturing the doppelgänger, getting her out of the dungeon, and thinking to interrogate her in a zone of truth. This whole plan is clever and exciting, and for the DM to piss on this accomplishment over a non-existent technicality raised my hackles enough that I needed to bitch about it on the internet.


How to fix it

First, we'll talk about how to fix this specific situation, and then we'll discuss some procedures and best practices for preventing similar things from happening in the future.

For the interrogation, the DM should have let the spell work. The doppelgänger still would have tried to get the players to go on the wild goose-chase but her attempts would fail.

"I suggest you visit a hidden shrine that I know the location of"
"Why?"
"Because I want to mislead you into a dangerous situation so I can escape... shit."

This is why the players play the game. To solve problems like this and kick ass.

Let the players know they won, and what they won by having the spell reveal all. If the players ask something you really can't reveal for some reason (hint you should reveal it anyway), just have the doppelgänger clam up and say nothing. At least the players get the hint that they are asking the right questions.

DM bias is unavoidable, but you can minimize it. My favorite way to do this is with random tables and procedures. The more things you proceduralize, the fewer decisions you have to make on the fly, and the less bias you inject into your games. Consider making random tables for anything. I choose overland encounters randomly, I choose PC targets in combat randomly, I determine the outcome of world events randomly, and even NPC motivations. Make the rules of the world and adjudicate them.

The fun side-effect of removing your bias and agendas from the game is that you get to explore the world WITH your players. You get to setup the dominoes, but you don't choose how they fall. You get to see what happens alongside them making dungeon mastering an act of discovery. I guarantee if you remove your decisions from play, you will have more fun running the game.

3. Be radically open with information

Let your players know what is happening in your game. It's not fun to guess what the DM is thinking and hope you did the 'right' thing. Design your adventures so that even if the players knew all your precious secrets, they would still have fun choosing between the options they have.

I highly recommend reading pretty much all of Hack & Slash for a more experienced, more nuanced, and better written viewpoint on this matter.

April 19, 2020
I'm working on a DIY D&D system right now. It's a mash up of every neat thing I've found on the internet while reading OSR blogs over the last few months. Honestly its a kludge and needs to be trimmed back, however, I think a few of the things I've come up with are worth keeping. The system steals the GLOG magic system pretty much whole-sale, but gives you double the magic dice and has a different spell list (see below). Some of these spells get a bit algebraic, sometimes using multiple variables to represent multiple costs for one spell. I also use a 'hold' mechanic in these spells that represents maintaining a magical effect by putting a number of dice aside, outside of your dice pool without spending them. When your concentration is broken or you end the effect of your own will, you roll the dice to see if you maintain the magic dice. Glog Arcane Spells Summon Animal - Summon [dice] HD worth of natural beasts Charm Person -  Increase one p
30 comments
Read more

Alternatives to flanking in 5e

April 22, 2018
Straight from the DMG, Chapter 8 "Optional Rule: Flanking" Read that? Optional! Well isn't that something?! Somewhere in the transition between editions I got something mixed up. This wouldn't be the first time I've unintentionally grafted something from a previous edition onto this one... "ME: Can I have a Diplomacy check? PLAYER: Wat?" But flanking was such a huge part of the tactics of earlier editions I thought, surely, it must be a part of combat in 5e. Nope! It's an optional rule tucked away in the DMG rather than in the core RAW (Rules as Written). Now, I don't plan on changing how I'm running our current campaign at all. My players have internalized flanking as part of how they play their characters. These tactics are core to their combat strategies, and I don't plan on yanking the rug out from under them. However, this got me curious about how you actually play the game without it. Flanking is such a powerful optiona
3 comments
Read more