Alternatives to flanking in 5e 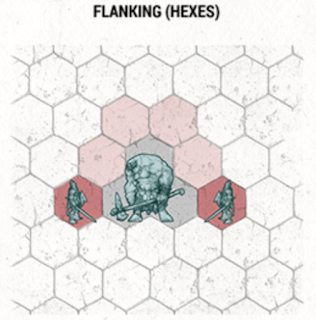 Read that? Optional! Well isn't that something?! Somewhere in the transition between editions I got something mixed up. This wouldn't be the first time I've unintentionally grafted something from a previous edition onto this one...

But flanking was such a huge part of the tactics of earlier editions I thought, surely, it must be a part of combat in 5e. Nope! It's an optional rule tucked away in the DMG rather than in the core RAW (Rules as Written).

Now, I don't plan on changing how I'm running our current campaign at all. My players have internalized flanking as part of how they play their characters. These tactics are core to their combat strategies, and I don't plan on yanking the rug out from under them. However, this got me curious about how you actually play the game without it.

Flanking is such a powerful optional rule that it really blinded me to a lot of the other options you have for gaining advantage during combat. When all you have to do is spend a bit of movement, some of the other ways of doing it become very underpowered.

Bear with me if you actually read the PHB correctly and have already figured all these things out.

"You can lend your aid to another creature in the completion of a task. When you take the Help action, the creature you aid gains advantage on the next ability check it makes to perform the task you are helping with, provided that it makes the check before the start of your next turn.
Alternatively, you can aid a friendly creature in attacking a creature within 5 feet of you. You feint, distract the target, or in some other way team up to make your ally's attack more effective. If your ally attacks the target before your next turn, the first attack roll is made with advantage."

This action was a big head-scratcher to me when I still thought flanking was a core rule. Why would you spend a whole action to give someone advantage in combat, when you could just move around them and attack?

Help hasn't been used once at my table, probably for two reasons.


Help can give advantage to attacks to anyone. I need to point this out to players in the future. I can see this being a very useful action for high AC characters who want the ensure that a spell attack from a distant ally actually connects with the enemy.

"When you take the Hide action, you make a Dexterity (Stealth) check in an attempt to hide, following the rules for hiding. If you succeed, you gain certain benefits, as described in the "Unseen Attackers and Targets" section later in this chapter."

Again from chapter 9 of the DMG. When flanking is on the table, this action is a bit of a head scratcher. Sure, being able to escape the prying eyes of your enemy is a helpful survival tactic, but why is it called out here in the combat actions section?

Well, because it's a consistent way of gaining advantage on an attack without needing the assistance of any of your allies. It's all making sense now!

"You extend your hand and point a finger at a target in range. Your magic grants you a brief insight into the target's defenses. On your next turn, you gain advantage on your first attack roll against the target, provided that this spell hasn't ended."

Why in the world would you ever use this spell in a game where flanking exists? You spend your whole action to gain advantage on your next attack. Seems like a waste.

If you aren't using flanking however, this spell fills a specific niche. Like the hide action, it allows you to give advantage to yourself without the assistance of another player character. It also has utility above the hide action in that it doesn't require you to make an opposed check. You can't fail at True Strike, you can fail at hiding.

"A blinded creature can't see and automatically fails any ability check that requires sight. Attack rolls against the creature have advantage, and the creature's attack rolls have disadvantage"

Invisibility is another effect that loses some of its luster in a combat encounter when advantage is easy to come by.

There are probably more ways to create advantage in combat I'm missing here, but I think we can draw some conclusions from this.

First is that the designers of 5e seemingly spent a lot of time and effort thinking about how to gain advantages in combat. In RAW, you don't get advantage for just positioning. It often costs a full action to gain advantage, and unless you are using spells, the action can come with some drawbacks or restrictions, namely needing an ally or a potential of failure.

Second is that the optional rules in the DMG don't come with their own analysis on what exactly the rule will do to your game. We've seen here a whole slice of the game is devalued by one simple little rule.

And last, I've come to the conclusion that playing without the optional flanking rule seems like a more tactically rich, and interesting way of handling gaining advantage in combat. It provides more difficult choices and tradeoffs for increasing your odds of hitting an enemy. I'll definitely be leaving out this optional rule in the next campaign I run.

April 19, 2020
I'm working on a DIY D&D system right now. It's a mash up of every neat thing I've found on the internet while reading OSR blogs over the last few months. Honestly its a kludge and needs to be trimmed back, however, I think a few of the things I've come up with are worth keeping. The system steals the GLOG magic system pretty much whole-sale, but gives you double the magic dice and has a different spell list (see below). Some of these spells get a bit algebraic, sometimes using multiple variables to represent multiple costs for one spell. I also use a 'hold' mechanic in these spells that represents maintaining a magical effect by putting a number of dice aside, outside of your dice pool without spending them. When your concentration is broken or you end the effect of your own will, you roll the dice to see if you maintain the magic dice. Glog Arcane Spells Summon Animal - Summon [dice] HD worth of natural beasts Charm Person -  Increase one p
34 comments
Read more

April 21, 2018
On the dndnext subreddit  today user,  Ronocnz  was brainstorming a mechanic for simulating that moment in fantasy fiction where the hero uses some last-ditch effort to summon some great inner power from the depths of his psyche and annihilate his enemies in a wave of unbridled magic as yet unavailable to the hero. This is a fun idea, and incredibly flavorful... and I love fun flavorful stuff. Ronocnz's suggestion was to take a spell they already know and cast it as a higher level spell that the player doesn't have access to. Also a great idea, but what he didn't have was a cost for this. A resource that the player could use that would make this mechanic solid, unabusable, and fun for everyone at the table. "How many turns until I have to cast cure light wounds on you again?" My suggestion was this... Unbridled Power Any spell-casting class has access to the unbridled power ability. This ability lets you cast any spell you know as if it were cast
2 comments
Read more